(This article was published on Twins Daily and Seamheads)

It’s the birthday of Washburn High School alumnus and Major League pitcher, Harold “Hy” Vandenberg, born in 1906. He made his Major League debut with the Boston Red Sox in 1935 at age 29, though he wouldn’t win his first game until 1940 with the New York Giants, and his 2nd not until 1944 with the Chicago Cubs. The 6’4″ right-hander, who got his professional start with the Minneapolis Millers, appeared in 90 Major League games, going 15-10 with 5 saves during seven seasons over an eleven year period. Additionally, he pitched in at least 435 minor league games, compiling a record of 139-128. 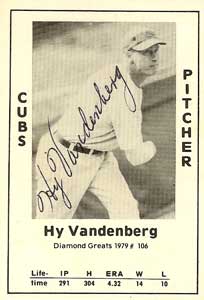 Hy Vandenberg was born in Abilene, Kansas. When Vandenberg was 4 years old his father died from tuberculosis and his mother moved the surviving members of the family to Minneapolis. Vandenberg began playing professional baseball with the Minneapolis Millers right out of high school, though he does not appear in the statistical record until age 24, when, in 1930, he pitched for the Bloomington, Illinois Cubs. He bounced around minor league baseball, going back and forth between Bloomington, Minneapolis and elsewhere before finally ending up in Syracuse in 1935 where he caught the attention of the Boston Red Sox. Vandenberg, however, didn’t exactly think he was given a fair trial with Boston. He made only three relief appearances over a six week period, giving up 12 runs in 5 1/3 innings before heading back to Syracuse.

Vandeberg next appeared in the Major Leagues in 1937,  getting 1 start for the New York Giants versus the Brooklyn Dodgers at Ebbets Field. He allowed 7 runs over 8 innings in a 7-4 loss. He appeared in 6 games for Giants in ’38, and 2 in ’39, spending most of his time with the Jersey City farm club. He finally got his first Major League win in 1940 in a 5-2 Giants win against the Phillies in Philadelphia. The New York Times described the 5 hit, complete game victory as an “elegant mound triumph.” 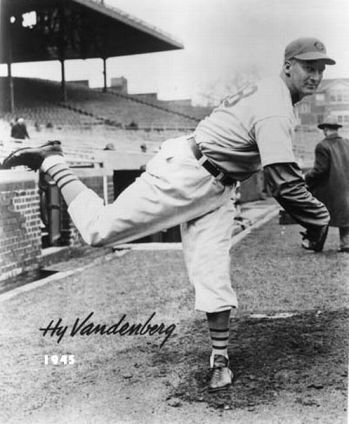 After 1940, Vandenberg would not pitch in the Majors again until 1944 when he re-emerged with the Chicago Cubs, appearing in 35 games, more than the 25 appearances he had accumulated in his previous 5 stints in the Majors combined. He finished 1944 with a 7-4 record, 2 saves and a 3.63 ERA.

Vandenberg held out into the 1945 season, training at the University of Minnesota. Once he did report to the Cubs, however, he matched his success from the year before, compiling a 7-3 record and 3.49 ERA in 30 games. The Cubs played the Detroit Tigers in the 1945 World Series. Though the Cubs lost in 7 games, Vandenberg provided solid relief pitching in games 4, 5 and 7.

Despite coming off of his two most successful seasons, the Cubs released Vandenberg during spring training in 1946. Possibly dispirited, he performed poorly in the minors with Oakland and Milwaukee. In 1947 his contract was purchased by Oklahoma City, but he chose instead to leave professional baseball and pitched for the Springfield, Minnesota team in the amateur Western Minor League.

Following his playing career, Vandenberg worked as an engineering technician for the Hennepin County Highway Administration. Hy Vandenberg died from cancer at his home in Bloomington, Minnesota in 1994. He was 88 years old.